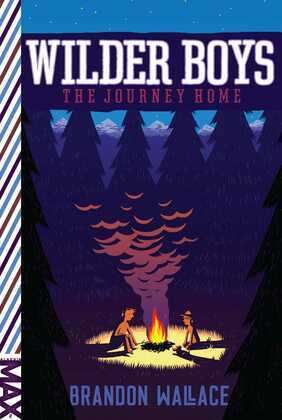 Two brothers must rely on all their wilderness skills to survive their journey home after reuniting with their father and living off the grid in the second adventure of the Wilder Boys series.

At the start of the summer, Jake and Taylor Wilder set out on the adventure of a lifetime. After seeing their mother loaded into an ambulance because of Bull, her terrifying boyfriend, the boys know they are no longer safe. So they go in search of their father, who has been living off the grid in Wyoming. After jumping trains, hitching a ride with a truck driver, and hiding in the luggage compartment of a tour bus, the boys finally find him in Grand Teton National Park.

Just as the boys are getting used to their father’s lifestyle—and his “my way is the only way” attitude—they learn that their mother is still alive. But if the brothers don’t give back the money they took from Bull last year, she could be taken away from them…for good.

Convinced that their father isn’t going to help, the Wilder boys set out on their own again. It’s a long way from Wyoming to Pittsburgh, and with winter approaching there will be new challenges. But they have to get back. Will the brothers be able to make it back to their mother before it’s too late?