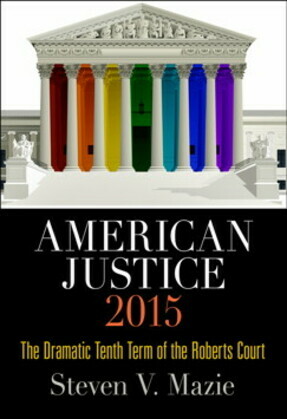 by Steven V. Mazie (Author)
Excerpt
Nonfiction Law Public Constitutional Social science Political science Government Judicial branch
warning_amber
One or more licenses for this book have been acquired by your organisation details
EPUB
Unlimited loans, One at a time
Details

American Justice 2015: The Dramatic Tenth Term of the Roberts Court is the indispensable guide to the most controversial and divisive cases decided by the Supreme Court in the 2014-15 term. Steven Mazie, Supreme Court correspondent for The Economist, examines the term's fourteen most important cases, tracing the main threads of contention and analyzing the expected impacts of the decisions on the lives of Americans. Legal experts and law students will be drawn to the lively summaries of the issues and arguments, while scholars and theorists will be engaged and provoked by the book's elegant introduction, in which Mazie invokes John Rawls's theory of "public reason" to defend the institution of the Supreme Court against its many critics.

Mazie contends that the Court is less ideologically divided than most observers presume, issuing many more unanimous rulings than 5-4 decisions throughout the term that concluded in June 2015. When ruling on questions ranging from marriage equality to freedom of speech to the Affordable Care Act, the justices often showed a willingness to depart from their ideological fellow travelers—and this was particularly true of the conservative justices. Chief Justice Roberts joined his liberal colleagues in saving Obamacare and upholding restrictions on personal solicitation of campaign funds by judicial candidates. Justice Samuel Alito and the chief voted with the liberals to expand the rights of pregnant women in the workplace. And Justice Clarence Thomas floated to the left wing of the bench in permitting Texas to refuse to print a specialty license plate emblazoned with a Confederate flag. American Justice 2015 conveys, in clear, accessible terms, the arguments, decisions, and drama in these cases, as well as in cases involving Internet threats, unorthodox police stops, death-penalty drugs, racial equality, voting rights, and the separation of powers.