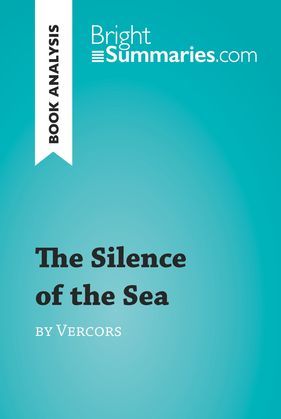 Book Analysis: The Silence of the Sea by Vercors

by Bright Summaries (Author)
Excerpt
Nonfiction Education and study aids Book notes
warning_amber
One or more licenses for this book have been acquired by your organisation details
EPUB
55 loans, One at a time
Details

Unlock the more straightforward side of The Silence of the Sea with this concise and insightful summary and analysis!

This engaging summary presents an analysis of The Silence of the Sea by Vercors, which tells the story of an old man and his niece who show their resistance by refusing to speak to the German officer they have to accommodate, even though he is an educated young man who dreams of a reconciliation between the two countries. The novel was secretly published during the Occupation in France and quickly became a symbol of mental resistant against the Germans. The hard-hitting novel was adapted for television and the programme was shown immediately after the end of World War II. It has since been brought to life on the stage and is still a firm favourite for many readers. Not much is known about the author, who published his works using the pseudonym Vercors, yet Silence of the Sea was named one of Le Monde's top 100 books of the century, proving its impact and importance.

Find out everything you need to know about The Silence of the Sea in a fraction of the time!

Why choose BrightSummaries.com?
Available in print and digital format, our publications are designed to accompany you in your reading journey. The clear and concise style makes for easy understanding, providing the perfect opportunity to improve your literary knowledge in no time.

See the very best of literature in a whole new light with BrightSummaries.com!