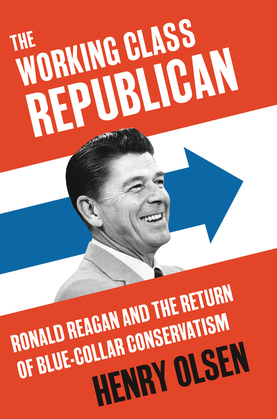 In this sure to be controversial book in the vein of The Forgotten Man, a political analyst argues that conservative icon Ronald Reagan was not an enemy of Franklin Delano Roosevelt and the New Deal, but his true heir and the popular program’s ultimate savior.

Conventional political wisdom views the two most consequential presidents of the twentieth-century—FDR and Ronald Reagan—as ideological opposites. FDR is hailed as the champion of big-government progressivism manifested in the New Deal. Reagan is seen as the crusader for conservatism dedicated to small government and free markets. But Henry Olsen argues that this assumption is wrong.

In Ronald Reagan: New Deal Republican, Olsen contends that the historical record clearly shows that Franklin Roosevelt and the New Deal itself were more conservative than either Democrats or Republicans believe, and that Ronald Reagan was more progressive than most contemporary Republicans understand. Olsen cuts through political mythology to set the record straight, revealing how Reagan—a longtime Democrat until FDR’s successors lost his vision in the 1960s—saw himself as FDR’s natural heir, carrying forward the basic promises of the New Deal: that every American deserves comfort, dignity, and respect provided they work to the best of their ability.

Olsen corrects faulty assumptions driving today’s politics. Conservative Republican political victories over the last thirty years have not been a rejection of the New Deal’s promises, he demonstrates, but rather a representation of the electorate’s desire for their success—which Americans see as fulfilling the vision of the nation’s founding. For the good of all citizens and the GOP, he implores Republicans to once again become a party of "FDR Conservatives"—to rediscover and support the basic elements of FDR (and Reagan’s) vision.