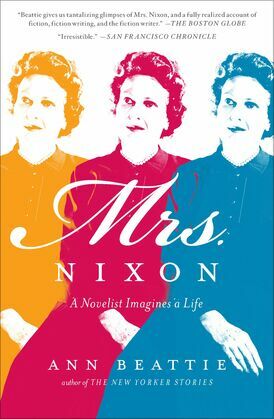 Dazzlingly original, Ann Beattie’s Mrs. Nixon is a riveting exploration of an elusive American icon and of the fiction writer’s art.

Pat Nixon remains one of our most mysterious and intriguing public figures, the only modern First Lady who never wrote a memoir. Beattie, like many of her generation, dismissed Richard Nixon’s wife: “interchangeable with a Martian,” she said. Decades later, she wonders what it must have been like to be married to such a spectacularly ambitious and catastrophically self-destructive man.

Drawing on a wealth of sources from Life magazine to accounts by Nixon’s daughter and his doctor to The Haldeman Diaries and Jonathan Schell’s The Time of Illusion, Beattie reconstructs dozens of scenes in an attempt to see the world from Mrs. Nixon’s point of view. Like Stephen King’s On Writing, this fascinating and intimate account offers readers a rare glimpse into the imagination of a writer.

Beattie, whose fiction Vanity Fair calls “irony-laced reports from the front line of the baby boomers’ war with themselves,” packs insight and humor into her examination of the First Couple with whom boomers came of age. Mrs. Nixon is a startlingly compelling and revelatory work.