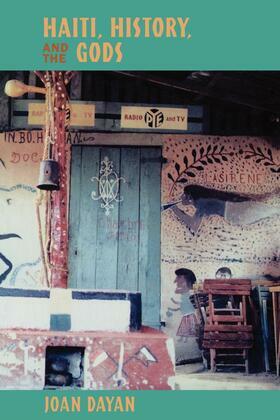 Haiti, History, and the Gods

In Haiti, History, and the Gods, Joan Dayan charts the cultural imagination of Haiti not only by reconstructing the island's history but by highlighting ambiguities and complexities that have been ignored. She investigates the confrontational space in which Haiti is created and recreated in fiction and fact, text and ritual, discourse and practice. Dayan's ambitious project is a research tour de force that gives human dimensions to this eighteenth-century French colony and provides a template for understanding the Haiti of today.

In examining the complex social fabric of French Saint-Domingue, which in 1804 became Haiti, Dayan uncovers a silenced, submerged past. Instead of relying on familiar sources to reconstruct Haitian history, she uses a startling diversity of voices that have previously been unheard. Many of the materials recovered here?overlooked or repressed historical texts, legal documents, religious works, secret memoirs, letters, and literary fictions?have never been translated into English. Others, such as Marie Vieux Chauvet's radical novel of vodou, Fonds des Nègres, are seldom used as historical sources.

Dayan also argues provocatively for the consideration of both vodou rituals and narrative fiction as repositories of history. Her scholarship is enriched by the insights she has gleaned from conversations and experiences during her many trips to Haiti over the past twenty years. Taken together, the material presented in Haiti, History, and the Gods not only restores a lost chapter of Haitian history but suggests necessary revisions to the accepted histories of the New World.