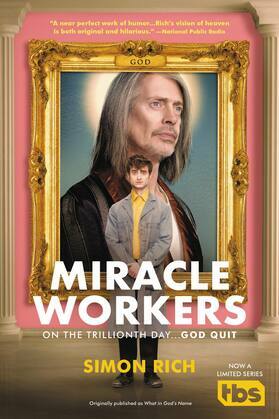 by Simon Rich (Author)
Excerpt
Fiction Humorous Media tie-in Fantasy Contemporary & supernatural fantasy
warning_amber
One or more licenses for this book have been acquired by your organisation details
EPUB
Unlimited loans, 2 years, One at a time
Details
Now a hit TBS comedy: Miracle Workers is "a near perfect work of humor" (NPR) about two underpaid angels working in the Department of Miracles.

Welcome to Heaven, Inc., the grossly mismanaged corporation in the sky. For as long as anyone can remember, the founder and CEO (known in some circles as "God") has been phoning it in. Lately, he's been spending most of his time on the golf course. And when he does show up at work, it's not to resolve wars or end famines, but to Google himself and read what humans have been blogging about him.

When God decides to retire (to pursue his lifelong dream of opening an Asian Fusion restaurant), he also decides to destroy Earth. His employees take the news in stride, except for Craig and Eliza, two underpaid angels in the lowly Department of Miracles. Unlike their boss, Craig and Eliza love their jobs — uncapping city fire hydrants on hot days, revealing lost keys in snow banks — and they refuse to accept that earth is going under.

The angels manage to strike a deal with their boss. He'll call off his Armageddon, if they can solve their toughest miracle yet: getting the two most socially awkward humans on the planet to fall in love. With doomsday fast approaching, and the humans ignoring every chance for happiness thrown their way, Craig and Eliza must move heaven and earth to rescue them -- and the rest of us, too.