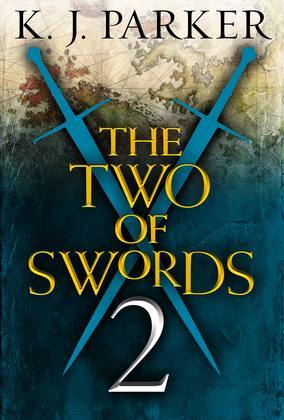 The Two of Swords: Part Two

"Why are we fighting this war? Because evil must be resisted, and sooner or later there comes a time when men of principle have to make a stand. Because war is good for business and it's better to die on our feet than live on our knees. Because they started it. But at this stage in the proceedings," he added, with a slightly lop-sided grin, "mostly from force of habit."

A soldier with a gift for archery. A woman who kills without care. Two brothers, both unbeatable generals, now fighting for opposing armies. No one in the vast and once glorious United Empire remains untouched by the rift between East and West, and the war has been fought for as long as anyone can remember. Some still survive who know how it was started, but no one knows how it will end.

This serial novel from the World Fantasy Award winning K. J. Parker is the story of a war on a grand scale, told through the eyes of its soldiers, politicians, victims and heroes. The first three parts of The Two of Swords will arrive in April 2015, with further installments to be released monthly.


This is the second installment in the Two of Swords serialization.