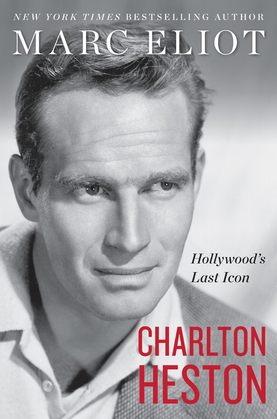 This is the definitive biography of one of the most iconic, complex and enduring legends of Hollywood’s golden age, whose major presence in American film, radio, television, stage and theater lasted beyond the second half of the 20th Century, and whose classic films are known throughout the world.

Eliot's biography is rich with facts details and anecdotal material that bring to life the complex story of this most iconic of American popular cultural giants to illuminate Heston's greatest achievements and his personal failures. He examines how a small boy from the backwoods of Michigan rose to become one of Hollywood’s most legendary stars,  one of the Greatest Generation’s true-life war heroes  - he saw action in the Pacific Theater during World War Two, before moving with his young wife from Chicago to New York’s Hell’s Kitchen to begin their struggle to find success in the theater. Eliot traces Heston’s pioneering work in live television, his being discovered by Hollywood because of it, and tells the amazing saga of his three films for Cecil B. DeMille and his two for William Wyler, including The Ten Commandments and Ben-Hur, the latter for which he won a Best-Actor Oscar, with fascinating new details, documents and photographs never before seen.  Eliot follows Heston through the genre of Science Fiction, which he helped revive with Planet of the Apes, and sheds new light on every one of Heston’s iconic films. He also examines Heston’s long political involvements, from being one of the organizers of The Arts Contingent of Marchers who joined with Martin Luther King, Jr. for the March on Washington, to his mentoring under Ronald Reagan for eventual presidency of the Screen Actors Guild, to his late-in-life presidency of the National Rifle Association, all the while being asked by both Republican and Democratic Parties to run for the United States Senate.