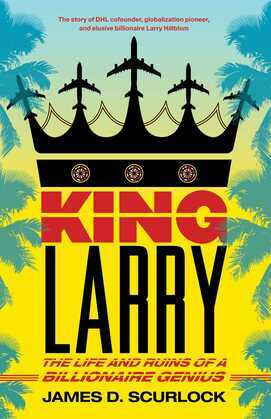 by James D. Scurlock (Author)
Excerpt
Nonfiction Business & economics Entrepreneurship Biography & autobiography
warning_amber
One or more licenses for this book have been acquired by your organisation details
EPUB
Unlimited loans, 2 years, One at a time
Details

From Howard Hughes to Mark Zuckerberg, the public has always been fascinated by genius entrepreneurs who succumb to their eccentricities. Now, James Scurlock engages, educates, and entertains readers with the captivating story of DHL cofounder and billionaire Larry Hillblom.

King Larry begins with an early biography of Larry Lee Hillblom, a mercurial young man who grew up on a peach farm outside of Fresno, California. Hillblom cofounded DHL in 1969 (three years before FedEx), and it became the fastest-growing corporation in history. Hillblom’s expatriate life began in 1981, when he retreated to a small tax haven in the Western Pacific. There he led the resistance to American meddling in the Marianas Islands. Hillblom’s voracious appetite for underage prostitutes is another facet of his unusual story. In 1995, Hillblom’s amoral, thrill-seeking nature caught up to him when his seaplane disappeared off the coast of Anatahan, leaving behind an estate worth billions. Weeks later, five impoverished women and their attorneys came forward to challenge Hillblom’s will in a legal battle for his fortunes that continues to this day.

Meticulously researched and thoroughly engaging, King Larry will satisfy fans of such bestsellers as Confessions of an Economic Hit Manand The Accidental Billionaires .