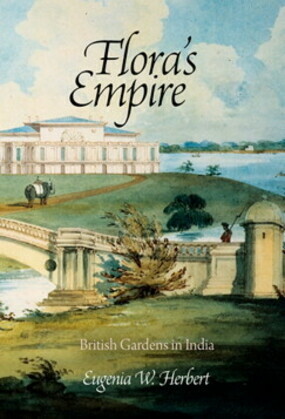 Like their penchant for clubs, cricket, and hunting, the planting of English gardens by the British in India reflected an understandable need on the part of expatriates to replicate home as much as possible in an alien environment. In Flora's Empire, Eugenia W. Herbert argues that more than simple nostalgia or homesickness lay at the root of this "garden imperialism," however. Drawing on a wealth of period illustrations and personal accounts, many of them little known, she traces the significance of gardens in the long history of British relations with the subcontinent. To British eyes, she demonstrates, India was an untamed land that needed the visible stamp of civilization that gardens in their many guises could convey.

Colonial gardens changed over time, from the "garden houses" of eighteenth-century nabobs modeled on English country estates to the herbaceous borders, gravel walks, and well-trimmed lawns of Victorian civil servants. As the British extended their rule, they found that hill stations like Simla offered an ideal retreat from the unbearable heat of the plains and a place to coax English flowers into bloom. Furthermore, India was part of the global network of botanical exploration and collecting that gathered up the world's plants for transport to great imperial centers such as Kew. And it is through colonial gardens that one may track the evolution of imperial ideas of governance. Every Government House and Residency was carefully landscaped to reflect current ideals of an ordered society. At Independence in 1947 the British left behind a lasting legacy in their gardens, one still reflected in the design of parks and information technology campuses and in the horticultural practices of home gardeners who continue to send away to England for seeds.