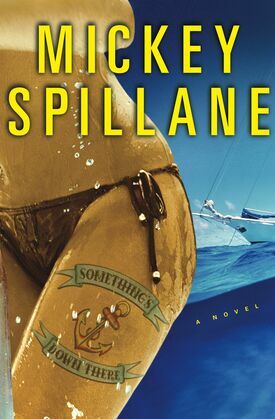 by Mickey Spillane (Author)
Excerpt
Fiction Espionage Thrillers
warning_amber
One or more licenses for this book have been acquired by your organisation details
EPUB
Unlimited loans, 2 years, One at a time
Details

The master of hard-boiled detective fiction is back -- and better than ever -- with Something's Down There, a blade-sharp thriller set among the islands of the Caribbean.
To the casual observer, Mako Hooker looks like any other grizzled fishing-boat captain trawling the Bermuda Triangle. He's content with his nets in the water and a beer in the cooler, but he's hardly your typical fisherman. Hooker is in fact a retired government operative taking a much-needed respite from his highly secret, highly lethal career in the States. But when local fishermen begin to fall prey to a mysterious sea creature the islanders dub "the eater," he discovers the truth in that old saw about the spy game: You're not retired from the Company until you're dead.
Is the monster a prehistoric beast rising from the depths? Or mines from a sunken WWII destroyer, only now shaken loose by the U.S. Navy's depth charges? Or the work of someone with an agenda even more deeply undercover than Hooker's?
Hooker quietly begins to investigate with the help of his unwitting fishing partner, Billy Bright; a local movie heiress, the seductive Judy Durant; and Hooker's old nemesis, Chana Sterling. The Company sent her as backup, but Hooker doesn't trust power-hungry government agents too far -- especially Chana, who once put a bullet in him for no good reason. As more boats are mauled and the islanders begin to panic, the action heats up and the players multiply: a Hollywood film company arrives on the scene, eager to turn live footage of "the eater" into box-office payoff, and the heavyweight film executive in charge looks suspiciously like Tony Pallatzo, a Brooklyn mobster from Hooker's violent past. As he moves steadily closer to the truth, Hooker realizes that someone (or something) is plotting to stop him, and only his rusty instincts will save him this time.
A riveting story of criminal intrigue, greed, romance, and the mysteries of the deep, Something's Down There showcases Mickey Spillane at his best.