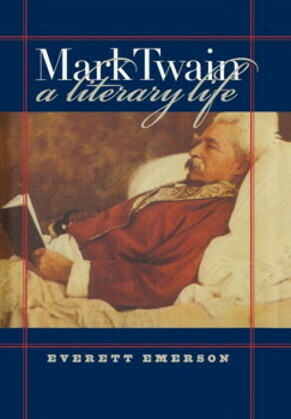 by Everett Emerson (Author)
Excerpt
Nonfiction Biography & autobiography Literary
warning_amber
One or more licenses for this book have been acquired by your organisation details
EPUB
Unlimited loans, One at a time
Details

Selected by Choice magazine as an Outstanding Academic Title

"Mark Twain endures. Readers sense his humanity, enjoy his humor, and appreciate his insights into human nature, even into such painful experiences as embarrassment and humiliation. No matter how remarkable the life of Samuel Clemens was, what matters most is the relationship of Mark Twain the writer and his writings. That is the subject of this book."—from the Preface

In Mark Twain, A Literary Life, Everett Emerson revisits one of America's greatest and most popular writers to explore the relationship between the life of the writer and his writings. The assumption throughout is that to see Mark Twain's writings in focus, one must give proper attention to their biographical context.

Mark Twain's literary career is fascinating in its strangeness. How could this genius have had so little sense of what he should next do? As a young man, Samuel Clemens's first vocation, that of journeyman printer, took him far from home to the sights of New York, Philadelphia, and Washington, while his next vocation would give him the identity by which we most frequently know him. His choice of "Mark Twain" as a pen name cemented his bond with the river, as did such books as Life on the Mississippi and Huckleberry Finn. Then following an unsuccessful try at silver mining, Clemens worked as a newspaperman, humorist, lecturer, but also cultivated an interest in playwriting, politics, and philosophizing.

In reporting the author's life, Emerson has endeavored to permit Mark Twain to tell his own story as much as possible, through the use of letters and autobiographical writings, some unpublished. These fascinating glimpses into the life of the writer will be of interest to all who have an abiding affection for Samuel Clemens and his extraordinary legacy.