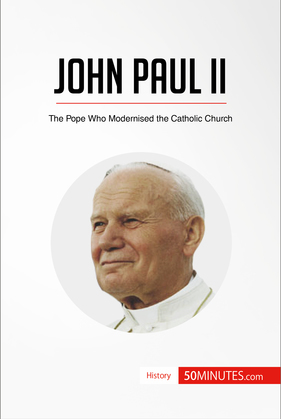 by 50MINUTES (Author)
Excerpt
Nonfiction Religion Catholic Education and study aids Travel Europe Italy
warning_amber
One or more licenses for this book have been acquired by your organisation details
EPUB
55 loans, One at a time
Details

Keen to learn but short on time? Get to grips with the life of John Paul II in next to no time with this concise guide.

50Minutes.com provides a clear and engaging analysis of Pope John Paul II. In 1978, to widespread surprise, the Polish cardinal Karol Wojtyła was elected pope of the Roman Catholic Church. In the course of over 26 years as pope, he would modernise the Church and the papacy, making them more visible and accessible, and would play an important role in fighting totalitarianism across the world. His commitment to human rights and religious freedom make him a crucial figure of the 20th century.

In just 50 minutes you will:
•Find out about John Paul II’s early life and ecclesiastic career before becoming pope
•Analyse his contribution to modernisation of the Catholic Church and his role in promoting democracy and human rights across the world
•Learn about his frequently controversial and unpopular opinions on matters of traditional morality

ABOUT 50MINUTES.COM | History & Culture
50MINUTES.COM will enable you to quickly understand the main events, people, conflicts and discoveries from world history that have shaped the world we live in today. Our publications present the key information on a wide variety of topics in a quick and accessible way that is guaranteed to save you time on your journey of discovery.