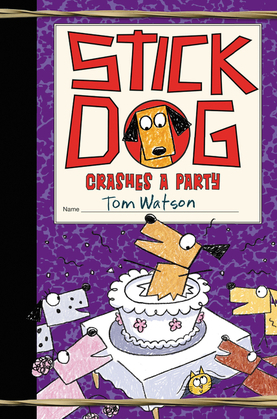 Stick Dog #8
by Tom Watson (Author)
Excerpt
Fiction Juvenile & young adult Themes Animals Dogs Beginner reader
warning_amber
One or more licenses for this book have been acquired by your organisation details
EPUB
26 loans, One at a time
Details

Stick Dog and his hungry pals have found plenty of tasty treats at Picasso Park before. But it’s never looked like it does on this dark, dark night. Strings of white lights, colorful fireworks, and an endless buffet of amazing food have transformed the park into a food-snatching wonderland.

There’s a party going on, and Stick Dog, Mutt, Poo-Poo, Stripes, and Karen are ready to crash it. But how will they do it?

It will take a top-notch strategy, some good luck, and a little help from two charming cats to complete their mission. It’s another smart, hilarious romp for Stick Dog and his team of strays.

Other favorites in the series include Stick Dog Wants a Hot Dog, Stick Dog Chases a Pizza, and many more!