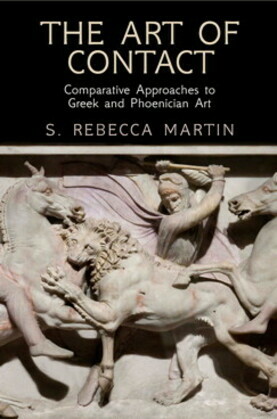 by S. Rebecca Martin (Author)
Excerpt
Nonfiction Arts Architecture History Ancient & classical History Ancient
warning_amber
One or more licenses for this book have been acquired by your organisation details
EPUB
Unlimited loans, One at a time
Details

The proem to Herodotus's history of the Greek-Persian wars relates the long-standing conflict between Europe and Asia from the points of view of the Greeks' chief antagonists, the Persians and Phoenicians. However humorous or fantastical these accounts may be, their stories, as voiced by a Greek, reveal a great deal about the perceived differences between Greeks and others. The conflict is framed in political, not absolute, terms correlative to historical events, not in terms of innate qualities of the participants. It is this perspective that informs the argument of The Art of Contact: Comparative Approaches to Greek and Phoenician Art.

Becky Martin reconsiders works of art produced by, or thought to be produced by, Greeks and Phoenicians during the first millennium B.C., when they were in prolonged contact with one another. Although primordial narratives that emphasize an essential quality of Greek and Phoenician identities have been critiqued for decades, Martin contends that the study of ancient history has not yet effectively challenged the idea of the inevitability of the political and cultural triumph of Greece. She aims to show how the methods used to study ancient history shape perceptions of it and argues that art is especially positioned to revise conventional accountings of the history of Greek-Phoenician interaction.

Examining Athenian and Tyrian coins, kouros statues and mosaics, as well as the familiar Alexander Sarcophagus and the sculpture known as the "Slipper Slapper," Martin questions what constituted "Greek" and "Phoenician" art and, by extension, Greek and Phoenician identity. Explicating the relationship between theory, method, and interpretation, The Art of Contact destabilizes categories such as orientalism and Hellenism and offers fresh perspectives on Greek and Phoenician art history.