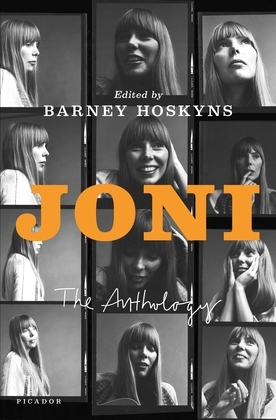 "Nearly 50 years’ worth of critical efforts to solve Mitchell’s mysteries have now been rounded up in Barney Hoskyns’s Joni: The Anthology....what comes through most consistently is a possessive impulse, a desire to really know an artist whose fierce privacy has often seemed at odds with the impression of intimacy conveyed by her music." --The Atlantic

Nine Grammys. More than ten million albums sold. Named one of the greatest singers and songwriters of all time by Rolling Stone. Joni: The Anthology is an essential collection of writings on Joni Mitchell that charts every major moment of the famed troubadour's extraordinary career, as it happened.

From album reviews, incisive commentary, and candid conversations, Joni: The Anthology includes, among other things, a review of Mitchell's first-ever show at LA's Troubadour in June of 1968, a 1978 interview by musician Ben Sidran on jazz great Charles Mingus, a personal reminiscence by Ellen Sander, a confidant of the Los Angeles singer-songwriter community, and a long "director's cut" version of editor Barney Hoskyns' 1994 MOJO interview. A time capsule of an icon, the anthology spans the entirety of Joni's career between 1967-2007, as well as thoughtful commentary on her early years.

In collecting materials long unavailable, rare, or otherwise difficult to find, Joni: The Anthology illuminates the evolution of modern rock journalism while providing an invaluable and accessible guide to appreciating the highs—and the lows—of a twentieth century legend.

“Once I crossed the border, I began to write and my voice changed. I no longer was imitative of the folk style. My voice was then my real voice and with a slight folk influence, but from the first album it was no longer folk music. It was just a girl with a guitar that made it look that way.”—Joni Mitchell, 1994