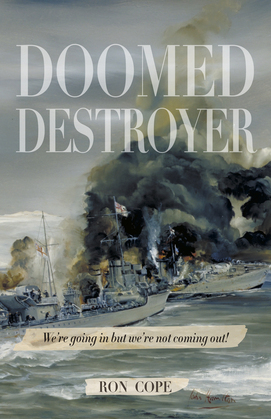 On March 1st 1940, Adolf Hitler ordered Operation Weserubung: the invasion of Norway. Having swept across Europe, the Nazi assault on Scandinavia was designed to secure the valuable iron ore being delivered by rail from Sweden to the Norwegian port of Narvik. To complete the task, Hitler sent ten large destroyers, with 220 Alpine Troops on each. Five smaller British H Class destroyers were sent up the fjord in retaliation, with little knowledge of what to expect. On April 10th , the first British battle of Narvik began in earnest. Royal Naval Captain Bernard Warburton-Lee led his flotilla at midnight into the fjord; undetected, under darkness and in driving snow storms. The harbour erupted into a torpedo attack; back into the fjord, the destroyers Hardy, Hunter, Hotspur, Havock and Hostilewere confronted by five German destroyers. A ferocious sea battle ensued and Hardy and Hunter were lost. In his first account of The Battle of Narvick, Attack at Dawn, Ron Cope focussed on the experience and the survival of the crew of HMS Hardy. After nine long years of research, he now reveals for the first time the untold story of HMS Hunter and her crew. Just forty-eight of the 159 servicemen on board survived in the cold waters of the fjord; picked up by German destroyers, they were eventually forced to march in freezing conditions over the mountains into internment in Sweden. Before the handover to the Swedish authorities, a German Army officer made the British servicemen sign a form: "On my being sent into Sweden I will not take up arms against Germany… Should I do so, and in the event of again being taken prisoner I shall be subject to such conditions as are provided under the Death Penalty Act”. Doomed Destroyer follows the astounding stories of the Hunter sailors, who would spend the next five years plotting and attempting to escape their captivity. Cope provides an extensive account of the viciously fought events at sea and in the fjords, examining the Norwegian price paid at Narvik and the early impact of war on the local community’s simple way of life. A remarkable account delivered with care and respect for those lost and left behind, Doomed Destroyer shines a light on this important but previously little known event in British history. “Without dedicated men like Ron Cope, the testimony and the stories of the men who were there – whether they were lost, wounded, or survived – what became of them, their families, might otherwise be lost to future generations.” Percy C. Danby, Lieutenant (E), C.D. RCN Retired. Ottawa. March 2017, survivor on HMS Hotspur.