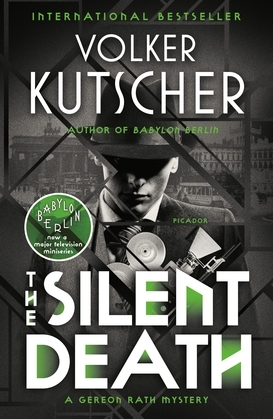 THE BASIS FOR THE INTERNATIONAL TV SENSATION BABYLON BERLIN

Volker Kutscher, author of the international bestseller Babylon Berlin, continues his Gereon Rath Mystery series with The Silent Death as a police inspector investigates the crime and corruption of a decadent 1930s Berlin in the shadows the growing Nazi movement.

March 1930: The film business is in a process of change. Talking films are taking over the silver screen and many a producer, cinema owner, and silent movie star is falling by the wayside.

Celebrated actress Betty Winter is hit by a spotlight while filming a talkie. At first it looks like an accident, but Superintendent Gereon Rath findsclues that point to murder. While his colleagues suspect the absconded lighting technician, Rath’s investigations take him in a completely different direction, and he is soon left on his own.

Steering clear of his superior who wants him off the case, Rath’s life gets more complicated when his father asks him to help Cologne mayor Konrad Adenauerwith a case of blackmail, and ex-girlfriend Charly tries to renew their relationship—all while tensions between Nazis and Communists escalate to violence.