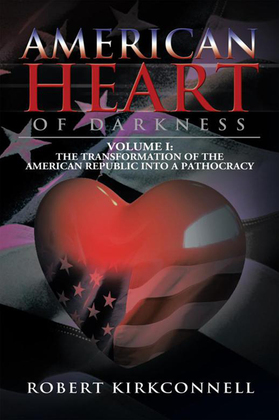 These days, most Americans know that the country has serious problems. Problems that will have to be addressed before the country can move forward. What are these problems? Where did they come from? Before we can move forward we have to know where we are and how we got there.
American Heart of Darkness paints an unvarnished picture of the seeds of destruction that were sown into the foundations of the Republic from the very beginning. How did slavery come about in the land of the free? How did a pre-Columbian native population, in North America alone, of over eighteen million (yes, you heard it right) native peoples dwindle down to about two hundred thousand? Was it really Small Pox? Why has a people who constantly talk about freedom, democracy, equality, human rights, life, liberty, and the pursuit of happiness continually practiced racism, genocide, and war? How do drugs come into the country, and who is really behind the most profitable product sold in the world? There are also other unanswered questions that need to be explored:
Why were thousands of the worst Nazi war criminals given refuge in the U.S.?
Who financed Hitler?
Where did Hitler get his master race and genocidal ideas from?
Was Lee Harvey Oswald a C.I.A. agent?
Were Oswald, Sirhan Sirhan, Ted Kaczynski, Timothy McVey, and the Peoples Temple all mind control, MKULTRA, subjects?
What really happened in the Jeffery MacDonald, so-called Fatal Vision case?
How does hundreds of billions of dollars come into the United States every year without detection?
The answers to these questions, and many more, will surprise you! They are not in the History books, although they should be. American Heart of Darkness, Volume I, explores the ugly side of America that has been hidden for far too long, and it is literally killing us. This book is not for the reader looking for an uplifting story to escape everyday life for a few hours. It is for true patriots who are sick and tired of being lied to and stolen from. It is for those who know they need to do something but do not know where to start. It is for those who feel powerless and that Americas problems are far too big for little ol me to handle. It is for those with the courage to go from darkness to light. As comedian and activist Dick Gregory once said, If you been in the DARK for so long, LIGHT will hurt your eyes. This book will hurt your eyes. The reader will be shocked, then angry, then motivated, and finally, in the authors next two books, empowered and liberated. It is better to see where we are and where we need to go, right now, before it is too late.
Congratulations! If you have read this far this book is probably for you. Please keep in mind the universal truth that with any form of government, the leaders only have the power that the people allow them have. This was true in India when a little skinny guy named Gandhi with no money and only a rag wrapped around his middle took on the British Empire, and won! There is no question that the American people have the power to reclaim a government that is clearly not being run for them. We have to empower ourselves to take this government back from only a handful of selfish and greedy individuals, who have proven that they only care about making more and more money. Let us all stop giving them the power that belongs to us. Reading this book is a beginning, and then we will talk about what to do about it in the authors next two books!