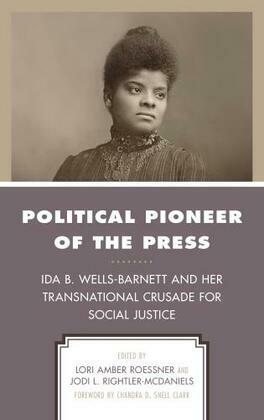 Political Pioneer of the Press

Known most prominently as a daring anti-lynching crusader, Ida B. Wells-Barnett (1862-1931) worked tirelessly throughout her life as a political advocate for the rights of women, minorities, and members of the working class. Despite her significance, until the 1970s Wells-Barnett’s life, career, and legacy were relegated to the footnotes of history. Beginning with the posthumously published autobiography edited and released by her daughter Alfreda in 1970, a handful of biographers and historians—most notably, Patricia Schechter, Paula Giddings, Mia Bay, Gail Bederman, and Jinx Broussard—have begun to place the life of Wells-Barnett within the context of the social, cultural, and political milieu of the nineteenth and twentieth centuries. This edited volume seeks to extend the discussions that they have cultivated over the last five decades and to provide insight into the communication strategies that the political advocate turned to throughout the course of her life as a social justice crusader. In particular, scholars such as Schechter, Broussard, and many more will weigh in on the full range of communication techniques—from lecture circuits and public relations campaigns to investigative and advocacy journalism—that Wells-Barnett employed to combat racism and sexism and to promote social equity; her dual career as a journalist and political agitator; her advocacy efforts on an international, national, and local level; her own failed political ambitions; her role as a bridge and interloper in key social movements of the nineteenth and twentieth century; her legacy in American culture; and her potential to serve as a prism through which to educate others on how to address lingering forms of oppression in the twenty-first century.