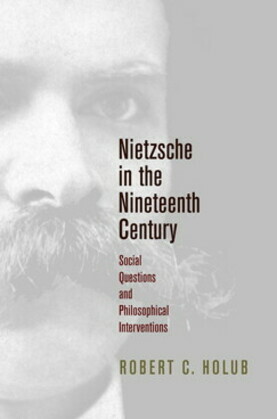 Nietzsche in the Nineteenth Century

by Robert C. Holub (Author)
Excerpt
Nonfiction Social science
warning_amber
One or more licenses for this book have been acquired by your organisation details
EPUB
Unlimited loans, One at a time
Details

Friedrich Nietzsche is often depicted in popular and scholarly discourse as a lonely philosopher dealing with abstract concerns unconnected to the intellectual debates of his time and place. Robert C. Holub counters this narrative, arguing that Nietzsche was very well attuned to the events and issues of his era and responded to them frequently in his writings. Organized around nine important questions circulating in Europe at the time in the realms of politics, society, and science, Nietzsche in the Nineteenth Century presents a thorough investigation of Nietzsche's familiarity with contemporary life, his contact with and comments on these various questions, and the sources from which he gathered his knowledge.

Holub begins his analysis with Nietzsche's views on education, nationhood, and the working-class movement, turns to questions of women and women's emancipation, colonialism, and Jews and Judaism, and looks at Nietzsche's dealings with evolutionary biology, cosmological theories, and the new "science" of eugenics. He shows how Nietzsche, although infrequently read during his lifetime, formulated his thought in an ongoing dialogue with the concerns of his contemporaries, and how his philosophy can be conceived as a contribution to the debates taking place in the nineteenth century. Throughout his examination, Holub finds that, against conventional wisdom, Nietzsche was only indirectly in conversation with the modern philosophical tradition from Descartes through German idealism, and that the books and individuals central to his development were more obscure writers, most of whom have long since been forgotten.

This book thus sheds light on Nietzsche's thought as enmeshed in a web of nineteenth-century discourses and offers new insights into his interactive method of engaging with the philosophical universe of his time.