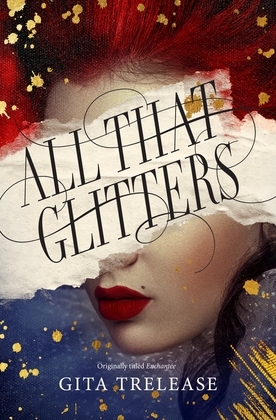 Originally published as Enchantée, All That Glitters is Gita Trelease’s debut fantasy about an orphaned girl who uses dark magic to save her sister and herself is “a soaring success” (NPR)!

Paris is a labyrinth of twisted streets filled with beggars and thieves, revolutionaries and magicians. Camille Durbonne is one of them. She wishes she weren’t...

When smallpox kills her parents, Camille must find a way to provide for her younger sister while managing her volatile brother. Relying on magic, Camille painstakingly transforms scraps of metal into money to buy food and medicine they need. But when the coins won’t hold their shape and her brother disappears with the family’s savings, Camille pursues a richer, more dangerous mark: the glittering court of Louis XVI and Marie Antoinette.

Using dark magic forbidden by her mother, Camille transforms herself into a baroness and is swept up into life at the Palace of Versailles, where aristocrats both fear and hunger for magic. As she struggles to reconcile her resentment of the rich with the allure of glamour and excess, Camille meets a handsome young inventor, and begins to believe that love and liberty may both be possible.

But magic has its costs, and soon Camille loses control of her secrets. And when revolution erupts, Camille must choose—love or loyalty, democracy or aristocracy, reality or magic—before Paris burns.