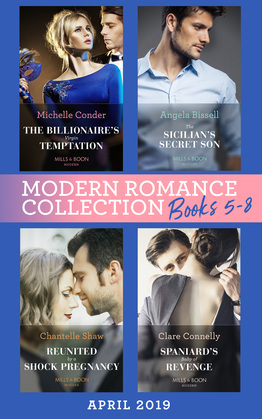 Antonio Herrera’s plan is simple: persuade innocent Amelia diSalvo to sell the shares in his rival’s business. But what the Spanish billionaire didn’t plan on was their intense connection. Now, Antonio only has one aim… the ultimate seduction! So, he’s stunned to discover their nine-month consequence. To secure his heir, he’ll do the unthinkable—and shockingly pleasurable—and make Amelia his wife!

Reunited by a Shock Pregnancy by Chantelle Shaw

Sienna should not be secretly attending her ex-husband’s wedding, but she has to see the woman Nico De Conti has replaced her with. Until she realises Nico isn’t the groom… Mortified, she can’t escape the church fast enough! But when Nico follows her, their burning fire spectacularly reignites, leading to one last night in Nico’s bed… A night that leaves Sienna shockingly pregnant with the Italian’s child!

Luca Cavallari is a man who always gets what he wants. So when he uncovers the existence of his hidden son, he’s determined to whisk his new family away to his sprawling Sicilian estate. Convincing gentle Annah Sinclair won’t be easy… but denying their still fierce attraction is even harder! And Luca knows there’s only one way to truly claim Annah and his son… marriage!

For Ruby Clarkson, a lavish masquerade ball is the perfect opportunity to forget her shy innocence and become someone else for the night. She’s stunned when billionaire Sam Ventura sweeps her from the dancefloor into an anonymous seduction that’s red-hot magic! But when Ruby realises her incognito hero is her new boss, and they’re stranded together for a weekend, Sam’s forbidden touch could be powerful enough to unravel Ruby forever…