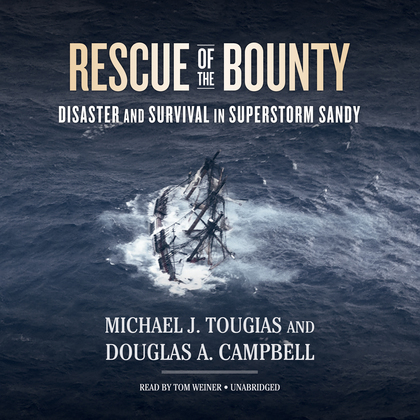 Rescue of the Bounty

Rescueof the Bounty is the harrowing story of the sinkingand rescue of Bounty?the tall shipused in the classic 1962 film Mutiny onthe Bounty?which was caught in the path of Hurricane Sandy with sixteenaboard.

On Thursday, October 25, 2012, Captain RobinWalbridge made the fateful decision to sail Bountyfrom New London, Connecticut, to St. Petersburg, Florida. Walbridge was wellaware that a hurricane was forecast to travel north from the Caribbean towardthe eastern seaboard. Yet the captain was determined to sail. As he explainedto his crew of fifteen: A ship is always safer at sea than in port. He intendedto sail ?around the hurricane? and told the crew that anyone who did not wantto come on the voyage could leave the ship?there would be no hard feelings. Asfate would have it, no one took the captain up on his offer.

Four days into the voyage, Superstorm Sandy made analmost direct hit on Bounty. Thevessel?s failing pumps could not keep up with the incoming water. The shipbegan to lose power as it was beaten and rocked by hurricane winds that spannedeight hundred miles. A few hours later, in the dark of night, the ship suddenlyoverturned ninety miles off the North Carolina coast in the ?Graveyard of theAtlantic,? sending the crew tumbling into an ocean filled with toweringthirty-foot waves. The Coast Guard then launched one of the most complex andmassive rescues in its history, flying two Jayhawk helicopter crews into thehurricane and lowering rescue swimmers into the raging seas again and again,despite the danger to their own lives.

In the uproar heard across American media in thedays following, a single question persisted: Why did the captain decide tosail? Through hundreds of hours of interviews with the crew members, theirfamilies, and the Coast Guard, the masterful duo of Michael J. Tougias andDouglas A. Campbell creates an in-depth portrait of the enigmatic CaptainWalbridge, his motivations, and what truly occurred aboard Bounty during those terrifying days at sea.

Dripping with suspense and vivid high-stakes drama, Rescue of the Bounty is an unforgettabletale about the brutality of nature and the human will to survive.