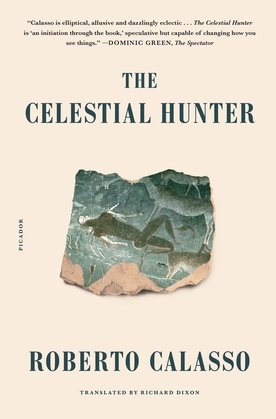 by Roberto Calasso (Author), Richard Dixon (Translator)
Excerpt
Nonfiction History Other History by country Europe Literary collections Essays
warning_amber
One or more licenses for this book have been acquired by your organisation details
EPUB
Unlimited loans, 2 years, One at a time
Details

"[Calasso's] flow of associations leaves you feeling not out of your depth, but smarter and better read." --The New York Times Book Review

The eighth part of Roberto Calasso’s singular work in progress that began in 1983 with The Ruin of Kasch, The Celestial Hunter is an inspired and provocative exploration of mankind’s relationship with myth, the divine, and the idea of transformation.

There was a time, even before prehistory, when man was simply a defenseless animal. The gods he worshiped took the form of other beasts or were the patterns of the stars he saw above him each night in the sky, which he transformed into figures and around which he created stories. Soon, however, man learned to imitate the animals that attacked him and he became a hunter. This transformation, Calasso posits, from defenseless victim to hunter was a key moment, the first step on man’s ascendance to power. Suddenly the notion of the hunter became fundamental. It would be developed over thousands of years through the figures that became central to Greek mythology, including the constellations. Among them was Orion, the celestial hunter, and his dog, Sirius.

Vivid and strikingly original, and expertly translated from the Italian by Richard Dixon, The Celestial Hunter traces how man created the divine myths that would become the cornerstones of Western civilization. As Calasso demonstrates, the repercussions of these ideas would echo through history, from Paleolithic to modern times. And they would be the product of one thing: the human mind.