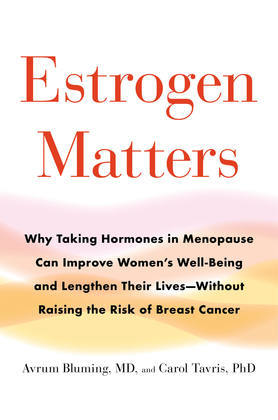 by Avrum Bluming (Author), Carol Tavris (Author)
Excerpt
Nonfiction Health & fitness Health Medical Endocrinology & metabolism
warning_amber
One or more licenses for this book have been acquired by your organisation details
EPUB
Unlimited loans, 2 years, One at a time
Details

A compelling defense of hormone replacement therapy, exposing the faulty science behind its fall from prominence and empowering women to make informed decisions about their health.

For years, hormone replacement therapy (HRT) was hailed as a miracle. Study after study showed that HRT, if initiated at the onset of menopause, could ease symptoms ranging from hot flashes to memory loss; reduce the risk of heart disease, Alzheimer's, osteoporosis, and some cancers; and even extend a woman's overall life expectancy. But when a large study by the Women's Health Initiative announced results showing an uptick in breast cancer among women taking HRT, the winds shifted abruptly, and HRT, officially deemed a carcinogen, was abandoned.

Now, sixteen years after HRT was left for dead, Dr. Bluming, a medical oncologist, and Dr. Tavris, a social psychologist, track its strange history and present a compelling case for its resurrection. They investigate what led the public -- and much of the medical establishment -- to accept the Women's Health Initiative's often exaggerated claims, while also providing a fuller picture of the science that supports HRT.

A sobering and revelatory read, Estrogen Matters sets the record straight on this beneficial treatment and provides an empowering path to wellness for women everywhere.