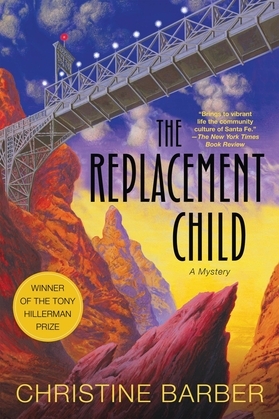 Late on a Monday night, editor Lucy Newroe answers the phone in the Capital Tribune newsroom. The caller is the notorious Scanner Lady---an anonymous elderly tipster whose hobby is to phone the newspaper with gossip from her police scanner. The old woman tells Lucy she heard two Santa Fe cops discussing a dead body. But when Lucy checks out the tip, she discovers Scanner Lady has been killed.
She tries to enlist the help of Detective Gil Montoya, but his mind is on another death. He has just been handed the case of Melissa Baca, a seventh-grade teacher whose body was thrown off the Rio Grande Gorge Bridge. Over the course of the next few days, as Lucy and Gil hunt down the culprits in each murder, they discover their cases are intertwined in the most intimate ways.
Rich with details of New Mexico and the people who live there, The Replacement Child is the perfect novel for anyone who has fallen in love with the Southwest that Tony Hillerman described so artfully in his Joe Leaphorn and Jim Chee mysteries.