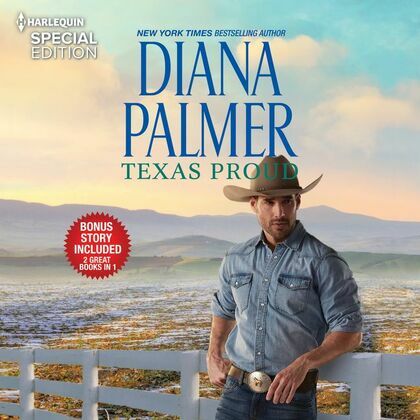 by Diana Palmer (Author), Todd McLaren (Narrateur)
Excerpt
Fiction Romance Western Contemporary Westerns
warning_amber
One or more licenses for this book have been acquired by your organisation details
AUDIOBOOK
Unlimited loans, One at a time
Details

…but some secrets never stay hidden.

Before he testifies in an important case, businessman Michael “Mikey” Fiore hides out in Jacobsville, Texas. On a rare night out, he crosses paths with softly beautiful Bernadette, who seems burdened with her own secrets. He hears whispers about a life-threatening condition, her solitary existence. This doesn’t stop him from wanting her, which endangers them both. Their bond grows into passion…until shocking truths surface.

Plus, a classic story from the Men of Medicine Ridge series, Circle of Gold!

Sparks fly the moment Kasie Mayfield arrives at Gil Callister’s sprawling ranch to care for his two adorable daughters. Gil is difficult to read, but he still sweeps her off her feet. Can Kasie convince the hard-edged widower that a circle of gold belongs on her finger?