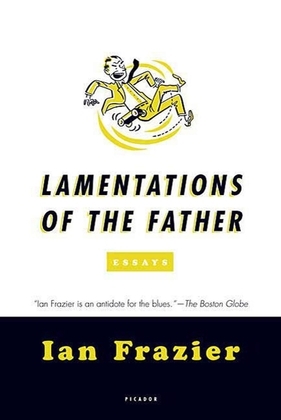 Lamentations of the Father

When The Atlantic Monthly celebrated its 150th anniversary by publishing excerpts from the best writing ever to appear in the magazine, in the category of the humorous essay it chose only four pieces?one by Mark Twain, one by James Thurber, one by Kurt Vonnegut, and Ian Frazier's 1997 essay "Lamentations of the Father." The title piece of this new collection has had an ongoing life in anthologies, in radio performances, in audio recordings, on the Internet, and in photocopies held by hamburger magnets on the doors of people's refrigerators. The august company in which The Atlantic put Frazier gives an idea of where on the literary spectrum his humorous pieces lie. Frazier's work is funny and elegant and poetic and of the highest literary aspiration, all at the same time. More serious than a "gag" writer, funnier than most essayists of equal accomplishment, Frazier is of a classical originality. This collection, a companion to his previous humor collections Dating Your Mom (1985) and Coyote v. Acme (1996), contains thirty-three pieces gathered from the last thirteen years.

Past winner of the Thurber Prize for American Humor; author of the nonfiction bestsellers Great Plains, Family, and On the Rez; contributor to The New Yorker, Outside, and other magazines, Frazier is the greatest writer of our (or indeed of any) age.