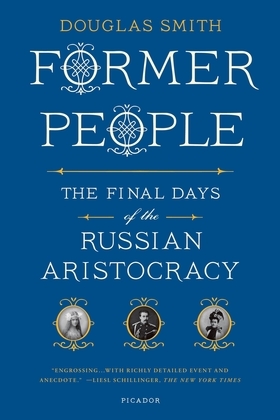 Epic in scope, precise in detail, and heart-breaking in its human drama, Former People is the first book to recount the history of the aristocracy caught up in the maelstrom of the Bolshevik Revolution and the creation of Stalin's Russia. Filled with chilling tales of looted palaces and burning estates, of desperate flights in the night from marauding peasants and Red Army soldiers, of imprisonment, exile, and execution, it is the story of how a centuries'-old elite, famous for its glittering wealth, its service to the Tsar and Empire, and its promotion of the arts and culture, was dispossessed and destroyed along with the rest of old Russia.

Yet Former People is also a story of survival and accommodation, of how many of the tsarist ruling class?so-called "former people" and "class enemies"?overcame the psychological wounds inflicted by the loss of their world and decades of repression as they struggled to find a place for themselves and their families in the new, hostile order of the Soviet Union. Chronicling the fate of two great aristocratic families?the Sheremetevs and the Golitsyns?it reveals how even in the darkest depths of the terror, daily life went on.

Told with sensitivity and nuance by acclaimed historian Douglas Smith, Former People is the dramatic portrait of two of Russia's most powerful aristocratic families, and a sweeping account of their homeland in violent transition.