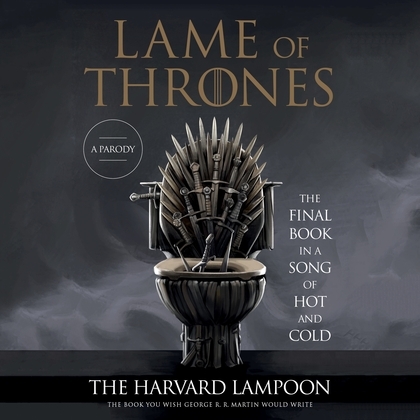 by The Harvard Lampoon (Author)
Excerpt
Nonfiction Humor Form Parodies
warning_amber
One or more licenses for this book have been acquired by your organisation details
AUDIOBOOK
Unlimited loans, 2 years, One at a time
Details

For nine years, readers have been waiting for George R.R. Martin to finish A Song of Ice and Fire. Well, now he doesn't have to. From The Harvard Lampoon-Harvard's legendary humor publication-comes an outrageous, uproariously funny parody of Game of Thrones, in the tradition of their previous bestselling parody book classics Bored of the Rings, Nightlight, and The Hunger Pains. An affectionate but take-no-prisoners send-up of the massive literary and television franchise, Lame of Thrones offers fans a way of reentering the fictional world they have come to love and merrily explodes all of its conventions-as well as their expectations of the characters-to hilarious ends. It may even leave you more satisfied than the actual TV ending of Game of Thrones. In fact, if it doesn't the Lampoon has really dropped the ball. Lame of Thrones will take you to Westopolis, where several extremely attractive egomaniacs are vying to be ruler of the realm and sit on the Pointy Chair. Our hero Jon Dough was a likely bet, but his untimely murder at the hands of his own men of the Night's Crotch has made that seem less likely. Will Dragon Queen Dennys Grandslam escape from her Clothkhaki captors and return to conquer the world? Or will she just get left in the desert counting grains of sand for the rest of the book? And what about Jon Dough's siblings? Will they be mentioned? Probably? Almost definitely, yes? It would be weird if they weren't prominent characters in the book, you say?To find out, read the book you wish George R.R. Martin would write but never will. The Lampoon-the place where such comedy writers and performers as Conan O'Brien, Colin Jost, B.J. Novak, Patricia Marx, Alan Yang, Andy Borowitz and many more all got their start-is ready to serve parody notice to the most entertaining, infuriating, and inescapable cultural phenomenon of the past decade.