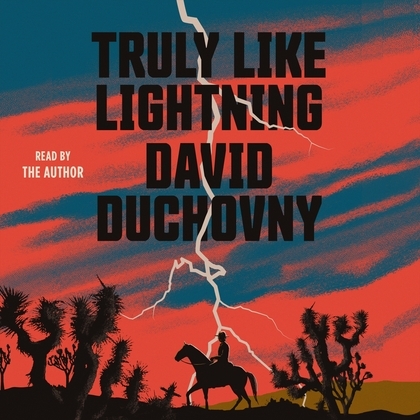 by David Duchovny (Author), David Duchovny (Narrateur)
Excerpt
Fiction Literary English literature American and Canadian literature
warning_amber
One or more licenses for this book have been acquired by your organisation details
AUDIOBOOK
Unlimited loans, 2 years, One at a time
Details

From the New York Times–bestselling author David Duchovny, an epic adventure that asks how we make sense of right and wrong in a world of extremes

For the past twenty years, Bronson Powers, former Hollywood stuntman and converted Mormon, has been homesteading deep in the uninhabited desert outside Joshua Tree with his three wives and ten children. Bronson and his wives, Yalulah, Mary, and Jackie, have been raising their family away from the corruption and evil of the modern world. Their insular existence—controversial, difficult, but Edenic—is upended when the ambitious young developer Maya Abbadessa stumbles upon their land. Hoping to make a profit, she crafts a wager with the family that sets in motion a deadly chain of events.

Maya, threatening to report the family to social services, convinces them to enter three of their children into a nearby public school. Bronson and his wives agree that if Maya can prove that the kids do better in town than in their desert oasis, they will sell her a chunk of their priceless plot of land. Suddenly confronted with all the complications of the twenty-first century that they tried to keep out of their lives, the Powerses must reckon with their lifestyle as they try to save it.

Truly Like Lightning, David Duchovny’s fourth novel, is a heartbreaking meditation on family, religion, sex, greed, human nature, and the vanishing environment of an ancient desert.

A Macmillan Audio production from Farrar, Straus and Giroux