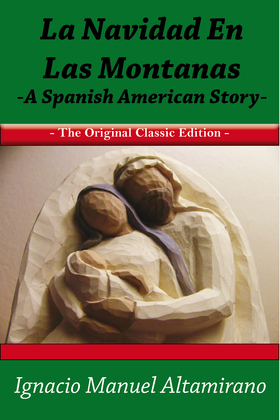 by Ignacio Manuel Altamirano (Author)
Excerpt
Nonfiction Religion History of religions
warning_amber
One or more licenses for this book have been acquired by your organisation details
EPUB
Unlimited loans, One at a time
Details

La Navidad en las Montanas which translates 'Christmas in the mountains' is written by Ignacio Manuel Altamirano, With Introduction, Notes, And Vocabulary. The text of this story is taken from the Fifth Edition, in the
Biblioteca de la Europa y América, Paris, 1891.

As the author himself says in his Dedicatoria, a picture of Mexican life is here offered, not as seen in large cities, which are much the same all the world over, but in remote rural districts, "en las montañas." The tale is idyllic, but in spite of its romantic spirit it presents a vivid picture of rural life in Mexico.

Translated from the book: "Were the inns with their innocent pleasures and worldly devotion and bustling, it was Christmas dinner with traditional dishes and their tasty treats, it was Mexico, in short, with singers and enthusiastic people, teeming in the streets tonight running rooster, with its main square full of candy stations, with their glowing portals, with French pastry shops, which display in the windows lit up with gas a world of toys and preserves precious sumptuous palaces were pouring through the windows torrents light and harmony. It was a feast that even caused me vertigo."

Written in Spanish and translations in English with the helpful vocabulary section makes this intreging christmas story is a learning experience as well!