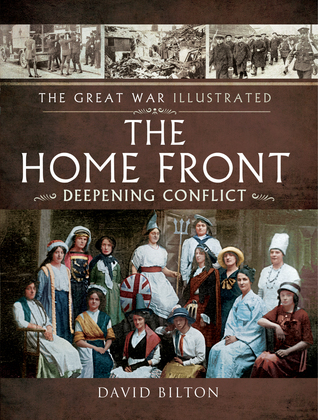 by David Bilton (Author)
Excerpt
Nonfiction Biography & autobiography Military History World War I
warning_amber
One or more licenses for this book have been acquired by your organisation details
EPUB
Unlimited loans, One at a time
Details
EPUB
40 loans, 10 Concurrent loans
Details

Many books have looked at the effect of the war on the Home Front, but this is the first book to take a glimpse at the Home Front photographically from an international point of view, covering both Allied and enemy countries, juxtaposing the same situations in different countries to show a similar response. This second volume chronicles the changes brought on by just a few months of war: spies, increased casualties, food shortages, changes in work patterns, the shortage of men in the work force, women at work and at the end of the year the slow rush in Britain to volunteer for the army, hoping to not be called for service. It also looks at the Home Front for those caught behind enemy lines where life was both spartan, potentially dangerous and subject to the whim of the victor. The photographs, many of which have not been seen before and some which have never been published, clearly show that each year of war had a further profound effect on each nation. This unique series of international photographic books fits in with the author's more textual books on the Home Front: Hull in the Great War and Reading in the Great War, both of which explore the complex life of a city at war.