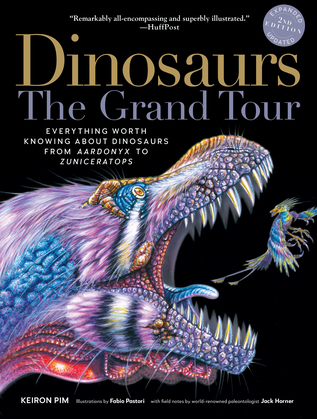 Bigger and Better, Updated and Expanded

We live in a golden age of paleontological discovery—on average, we find one new dinosaur species per week. The most fascinating among them take their place in this updated edition of Dinosaurs—The Grand Tour; from Aardonyx, a lumbering beast that formed a link between two- and four-legged dinosaurs, to Zuniceratops, who boasted a deadly pair of horns. Here, you’ll find everything worth knowing about every dinosaur worth knowing—more than 300 in all, including:

At-a-glance sidebars put each dinosaur’s diet, size, and location at your fingertips. Stories of harrowing expeditions conjure the thrills of history’s most famous dinosaur hunters. Highlights from recent research reveal what’s new in paleontology today, including scientists’ evolving idea of what dinosaurs actually looked like. (Hint: They were more colorful—and feathery!—than we ever thought before.) And illustrations on virtually every page bring these prehistoric creatures to life in all their glory.
Contributori
Jack Horner (Collaboratore)
Data di pubblicazione
10 dicembre 2019
Editore
The Experiment
ISBN
9781615195251
ISBN cartaceo
9781615195190
Dimensioni del file
98 MB