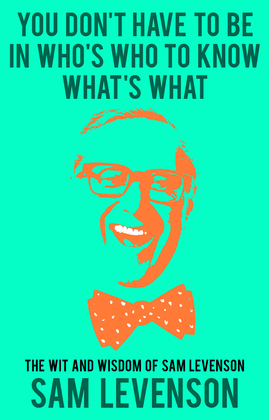 The author and humorist Sam Levenson is quoted hundreds of time each day on Twitter, and his sayings appear on everything from t-shirts to inspirational signs. To read through and savor You Don’t Have To Be In Who’s Who To Know What’s What is to discover much of the source material for his timeless wisdom. It is a treasure trove of topics ranging from family (“Insanity is hereditary; you can get it from your children”) to perseverance (“Don’t watch the clock; do what it does. Keep going.”) Levenson’s upbringing was as the youngest of eight children in a large Jewish immigrant family in New York. He evolved from a Spanish teacher in Brooklyn to working the Catskills circuit as a comedian and by the 1950s was a fixture in American homes as television personality, appearing and guest hosting numerous times on classic shows like This Is Show Business, Two For The Money, and The Ed Sullivan Show. For several years, he hosted his own variety show on CBS called The Sam Levenson Show, where the set doubled as a school classroom and the guests often evoked Levenson’s love of learning, teaching, and family. These experiences informed his lessons about life, family and careers, and make this definitive collections of his views and sayings so timeless.