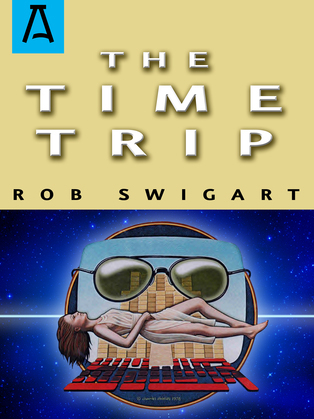 by Rob Swigart (Author)
Excerpt
Fiction Fantasy Science fiction Humorous
warning_amber
One or more licenses for this book have been acquired by your organisation details
EPUB
Unlimited loans, One at a time
Details

In this boisterous time trip of discovery, Rob Swigart trains his inventive wit on love and loss, guilt and redemption, gurus, high technology, multiple orgasms and cryogenics. His fans will revel in his satire and laugh uproariously through his new novel—his most inventive yet.
After his bored and ignored wife, Penny Gamesh, ends it all by sticking her head inside a microwave oven and checking into the afterlife, Barney, discovers he loves her and wants her back. He engineers a daring computer crime, plugging into a network of government computers, and travels back in time to Mesopotamia, 2542 BC, to talk to King Gilgamesh, who tried to unlock the secrets of immortality. There, Barney falls in love with Penny’s former incarnation, a temple prostitute. While there, he explores his capacity for love and friendship, and challenges the mystery of death. The results surprise everyone.