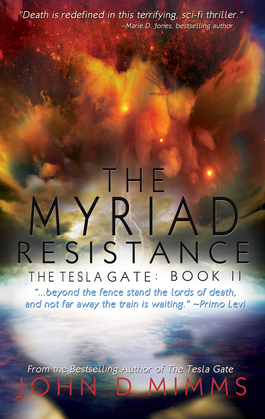 by John D. Mimms (Author)
Excerpt
Fiction Fantasy Contemporary & supernatural fantasy Occult & supernatural Supernatural creatures Ghost
warning_amber
One or more licenses for this book have been acquired by your organisation details
EPUB
Unlimited loans, One at a time
Details

Three months ago, a cosmic storm entered Earth’s atmosphere, mystifying scientists with its unprecedented side effect: those who have died and chosen not to cross over are suddenly palpable, and can interact with the living. The “Impals” are embraced by their loved ones, but persecuted by those who fear them. The government’s solution is to send them “back” using the Tesla Gate—which could destroy the soul.

When Major Cecil Garrison tries to rescue Thomas Pendleton and his son, Seth, from this fate, he finds himself imprisoned by his own father, General Ott Garrison. After a daring escape, Cecil joins the Myriad Resistance, a movement to save the Impals from what most consider a government sanctioned holocaust.

Tragedy strikes just as the Impals start their dangerous exodus to Europe beneath the murky waters of the Chesapeake Bay. And this is only the beginning, as the eye of the storm envelopes the Earth—bringing darkness and horror beyond imagination . . .