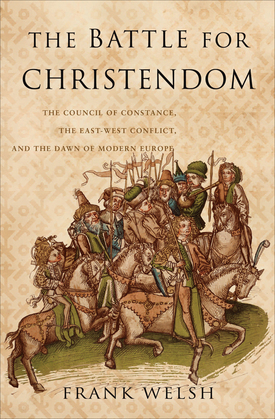 The Battle for Christendom

At the dawn of the fifteenth century, the Ottoman Empire posed an existential threat to Christian Europe. Meanwhile, the Catholic Church was in chaos, with three Popes claiming the Chair of Saint Peter and dangerous stirrings of reform. In an attempt to save the Christian world, Emperor Sigismund of the Holy Roman Empire called the nations of Europe together for a conference at Constance, beside the Rhine.

In The Battle for Christendom, historian Frank Welsh demonstrates that the 1414 Council of Constance was one of the most pivotal events in European history. The last event of the medieval world, the months of fierce debate and political maneuvering heralded the dawn of the Renaissance and the rise of humanism. Yet it would also bring about darker events, as the first moments of the Protestant Reformation began with the burning of the Czech divine, Jan Hus.

The story rises to a climax on the battlements of Constantinople in 1453 where, despite all of Sigismund’s attempts to repel the Ottomans, the East rose up once more. In Welsh’s lively retelling, The Battle for Christendom is an enthralling history that holds lessons for our own times of international turmoil.
Date de publication
4 septembre 2008
Éditeur
Abrams Press
Nombre de pages
320
ISBN
9781468315257
ISBN papier
9781590201237
Taille du fichier
4 Mo