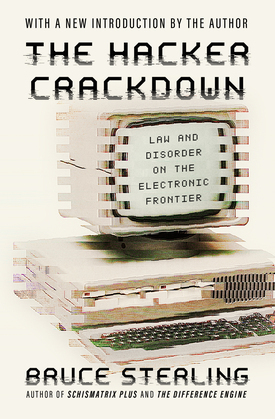 de Bruce Sterling (Autor)
Extracto
No Ficción Informática Web
warning_amber
One or more licenses for this book have been acquired by your organisation details
EPUB
Préstamos ilimitados, Uno a la vez
Detalles

The bestselling cyberpunk author “has produced by far the most stylish report from the computer outlaw culture since Steven Levy’s Hackers” (Publishers Weekly).

Bruce Sterling delves into the world of high-tech crime and punishment in one of the first books to explore the cyberspace breaches that threaten national security. From the crash of AT&T’s long-distance switching system to corporate cyberattacks, he investigates government and law enforcement efforts to break the back of America’s electronic underground in the 1990s. In this modern classic, “Sterling makes the hackers—who live in the ether between terminals under noms de net such as VaxCat—as vivid as Wyatt Earp and Doc Holliday. His book goes a long way towards explaining the emerging digital world and its ethos” (Publishers Weekly).

This edition features a new preface by the author that analyzes the sobering increase in computer crime over the twenty-five years since The Hacker Crackdown was first published.

“Thoroughly researched, this account of the government’s crackdown on the nebulous but growing computer-underground provides a thoughtful report on the laws and rights being defined on the virtual frontier of cyberspace. . . . An enjoyable, informative, and (as the first mainstream treatment of the subject) potentially important book . . . Sterling is a fine and knowledgeable guide to this strange new world.” —Kirkus Reviews

“A well-balanced look at this new group of civil libertarians. Written with humor and intelligence, this book is highly recommended.” —Library Journal