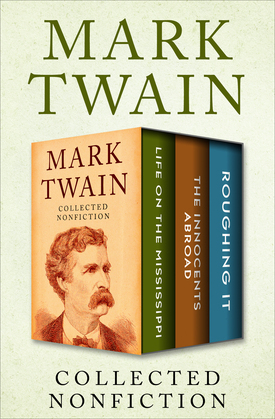 by Mark Twain (Author)
Excerpt
Fiction Travel writing Nonfiction Biography & autobiography Personal memoirs Adventurers & explorers
warning_amber
One or more licenses for this book have been acquired by your organisation details
EPUB
Unlimited loans, One at a time
Details

These three travel memoirs by the beloved author of The Adventures of Huckleberry Finn capture nineteenth-century life in America and beyond.

Life on the Mississippi: Before Samuel Clemens became Mark Twain, he trained to be a Mississippi River steamboat pilot. Here Twain recounts his apprenticeship under legendary captain Horace Bixby, the dramatic fates of riverboat gamblers, and much more. Years later, as a passenger on a voyage from St. Louis to New Orleans, he witnesses the changes wrought by the Civil War and the steady advance of railroad transportation.

The Innocents Abroad: Based on a series of letters first published in American newspapers, this is Twain’s hilarious and insightful account of an organized tour of Europe and the Holy Land, undertaken in 1867. With trademark satirical wit, he skewers the pretensions of Americans overseas and delights in tormenting local tour guides. First published in 1869, The Innocents Abroad made Twain a national celebrity and remains one of the bestselling travelogues of all time.

Roughing It: In 1861, Twain joined his older brother on a stagecoach journey from Missouri to Carson City, Nevada. Having planned to be gone for only three months, he spent the next “six or seven years” exploring the great American frontier, from the Rocky Mountains to Hawaii. Along the way, he made and lost a theoretical fortune, danced in the finest hotels of San Francisco, and came to terms with freezing to death in a snow bank—only to discover, in the light of morning, that he was fifteen steps from a comfortable inn.