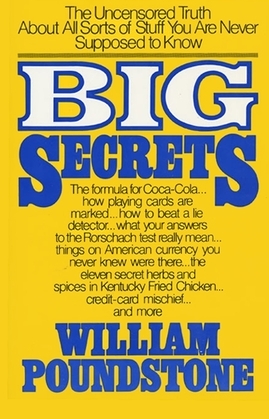 The Book That Gives the Inside Story on Hundreds of Secrets of American Life --Big Secrets.

Are there really secret backward messages in rock music, or is somebody nuts? We tested suspect tunes at a recording studio to find out.

What goes on at Freemason initiations? Here's the whole story, including -- yes! -- the electric carpet.

Colonel Sanders boasted that Kentucky Fried Chicken's eleven secret herbs and spices "stand on everybody's shelf." We got a sample of the seasoning mix and sent it to a food chemist for analysis.

Feverish rumor has it that Walt Disney's body was frozen and now lies in a secret cryonic vault somewhere beneath the Pirates of the Caribbean exhibit at Disneyland. Read the certified stranger-than-fiction truth.

Don't bother trying to figure out how Doug Henning, David Copperfield, and Harry Blackstone, Jr., perform their illusions. Big Secrets has complete explanations and diagrams, nothing left to the imagination.