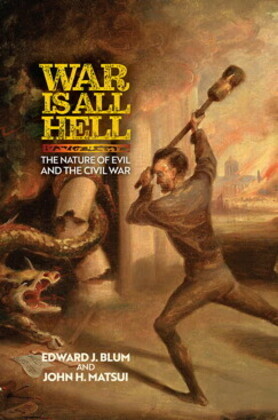 War Is All Hell

During his first inaugural address, Abraham Lincoln expressed hope that the "better angels of our nature" would prevail as war loomed. He was wrong. The better angels did not, but for many Americans, the evil ones did. War Is All Hell peers into the world of devils, demons, Satan, and hell during the era of the American Civil War. It charts how African Americans and abolitionists compared slavery to hell, how Unionists rendered Confederate secession illegal by linking it to Satan, and how many Civil War soldiers came to understand themselves as living in hellish circumstances.

War Is All Hell also examines how many Americans used evil to advance their own agendas. Sometimes literally, oftentimes figuratively, the agents of hell and hell itself became central means for many Americans to understand themselves and those around them, to legitimate their viewpoints and actions, and to challenge those of others. Many who opposed emancipation did so by casting Abraham Lincoln as the devil incarnate. Those who wished to pursue harsher war measures encouraged their soldiers to "fight like devils." And finally, after the war, when white men desired to stop genuine justice, they terrorized African Americans by dressing up as demons.

A combination of religious, political, cultural, and military history, War Is All Hell illuminates why, after the war, one of its leading generals described it as "all hell."