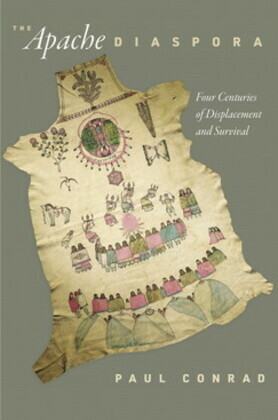 Across four centuries, Apache (Ndé) peoples in the North American West confronted enslavement and forced migration schemes intended to exploit, subjugate, or eliminate them. While many Indigenous groups in the Americas lived through similar histories, Apaches were especially affected owing to their mobility, resistance, and proximity to multiple imperial powers. Spanish, Comanche, Mexican, and American efforts scattered thousands of Apaches across the continent and into the Caribbean and deeply impacted Apache groups that managed to remain in the Southwest.

Based on archival research in Spain, Mexico, and the United States, as well Apache oral histories, The Apache Diaspora brings to life the stories of displaced Apaches and the kin from whom they were separated. Paul Conrad charts Apaches' efforts to survive or return home from places as far-flung as Cuba and Pennsylvania, Mexico City and Montreal. As Conrad argues, diaspora was deeply influential not only to those displaced, but also to Apache groups who managed to remain in the West, influencing the strategies of mobility and resistance for which they would become famous around the world.

Through its broad chronological and geographical scope, The Apache Diaspora sheds new light on a range of topics, including genocide and Indigenous survival, the intersection of Native and African diasporas, and the rise of deportation and incarceration as key strategies of state control. As Conrad demonstrates, centuries of enslavement, warfare, and forced migrations failed to bring a final solution to the supposed problem of Apache independence and mobility. Spain, Mexico, and the United States all overestimated their own power and underestimated Apache resistance and creativity. Yet in the process, both Native and colonial societies were changed.