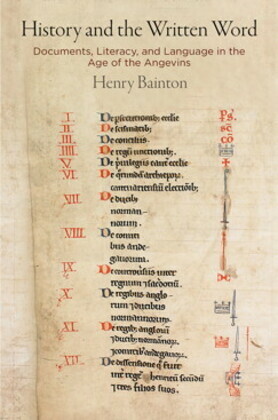 History and the Written Word

Coming upon the text of a document such as a charter or a letter inserted into the fabric of a medieval chronicle and quoted in full or at length, modern readers might well assume that the chronicler is simply doing what good historians have always done—that is, citing his source as evidence. Such documentary insertions are not ubiquitous in medieval historiography, however, and are in fact particularly characteristic of the history-writing produced by the Angevins in England and Northern France in the later twelfth century.

In History and the Written Word, Henry Bainton puts these documentary gestures center stage in an attempt to understand what the chroniclers were doing historiographically, socially, and culturally when they transcribed a document into a work of history. Where earlier scholars who have looked at the phenomenon have explained this increased use of documents by considering the growing bureaucratic state and an increasing historiographical concern for documentary evidence, Bainton seeks to resituate these histories, together with their authors and users, within literate but sub-state networks of political power. Proposing a new category he designates "literate lordship" to describe the form of power with which documentary history-writing was especially concerned, he shows how important the vernacular was in recording the social lives of these literate lords and how they found it a particularly appropriate medium through which to record their roles in history.

Drawing on the perspectives of modern and medieval narratology, medieval multilingualism, and cultural memory, History and the Written Word argues that members of an administrative elite demonstrated their mastery of the rules of literate political behavior by producing and consuming history-writing and its documents.