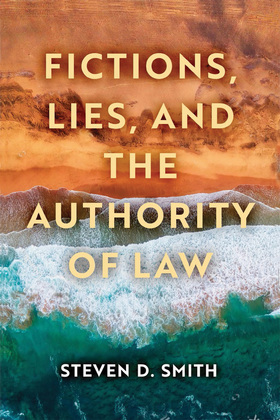 Fictions, Lies, and the Authority of Law

Fictions, Lies, and the Authority of Law discusses legal, political, and cultural difficulties that arise from the crisis of authority in the modern world.

Is there any connection linking some of the maladies of modern life—“cancel culture,” the climate of mendacity in public and academic life, fierce conflicts over the Constitution, disputes over presidential authority? Fictions, Lies, and the Authority of Law argues that these diverse problems are all a consequence of what Hannah Arendt described as the disappearance of authority in the modern world. In this perceptive study, Steven D. Smith offers a diagnosis explaining how authority today is based in pervasive fictions and how this situation can amount to, as Arendt put it, “the loss of the groundwork of the world.”

Fictions, Lies, and the Authority of Law considers a variety of problems posed by the paradoxical ubiquity and absence of authority in the modern world. Some of these problems are jurisprudential or philosophical in character; others are more practical and lawyerly—problems of presidential powers and statutory and constitutional interpretation; still others might be called existential. Smith’s use of fictions as his purchase for thinking about authority has the potential to bring together the descriptive and the normative and to think about authority as a useful hypothesis that helps us to make sense of the empirical world. This strikingly original book shows that theoretical issues of authority have important practical implications for the kinds of everyday issues confronted by judges, lawyers, and other members of society. The book is aimed at scholars and students of law, political science, and philosophy, but many of the topics it addresses will be of interest to politically engaged citizens.