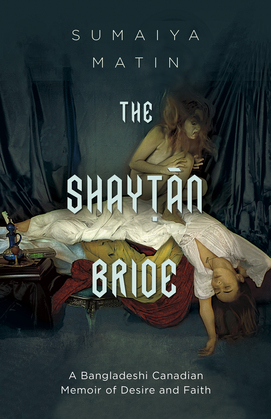 The true story of how one Muslim woman shaped her own fate and escaped her forced wedding.

Sumaiya Matin was never sure if the story of the Shaytan Bride was truth or myth. When she moved at age six from Dhaka, Bangladesh, to Thunder Bay, Ontario, recollections of this devilish bride followed her. At first, the Shaytan Bride seemed to be the monster of fairy tales, a woman possessed or seduced by a jinni. But everything changes during a family trip to Bangladesh, and in the weeks leading to Sumaiya’s own forced wedding, she discovers that the story — and the bride herself — are much closer than they seem.

The Shaytan Bride is the true coming-of-age story of a girl navigating desire and faith. Through her journey into adulthood, she battles herself and her circumstances to differentiate between destiny and free will. Sumaiya Matin’s life in love and violence is a testament to one woman’s strength as she faces the complicated fallout of her decisions.