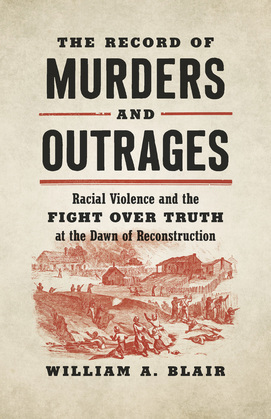 The Record of Murders and Outrages

After the Civil War's end, reports surged of violence by Southern whites against Union troops and Black men, women, and children. While some in Washington, D.C., sought to downplay the growing evidence of atrocities, in September 1866, Freedmen's Bureau commissioner O. O. Howard requested that assistant commissioners in the readmitted states compile reports of "murders and outrages" to catalog the extent of violence, to prove that the reports of a peaceful South were wrong, and to argue in Congress for the necessity of martial law. What ensued was one of the most fascinating and least understood fights of the Reconstruction era—a political and analytical fight over information and its validity, with implications that dealt in life and death.

Here William A. Blair takes the full measure of the bureau's attempt to document and deploy hard information about the reality of the violence that Black communities endured in the wake of Emancipation. Blair uses the accounts of far-flung Freedmen's Bureau agents to ask questions about the early days of Reconstruction, which are surprisingly resonant with the present day: How do you prove something happened in a highly partisan atmosphere where the credibility of information is constantly challenged? And what form should that information take to be considered as fact?