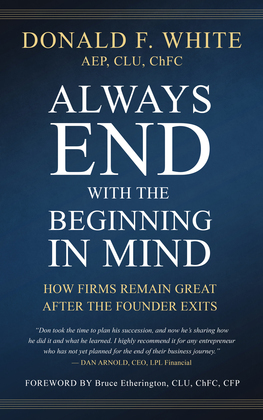 Always End with the Beginning in Mind

Winner of the Firebird Book Award

Succession Planning is a subject people love to talk about, but rarely seem to accomplish. Whether it is the complexity of the transaction, a lack of confidence in the candidates, an owner not being able to let go, or a myriad of other issues, most businesses simply fail to transition from one generation to the next. This book unlocks the secrets of transitioning a financial services practice at the top of its value and provides you with a model of what it takes for a succession plan to not only work, but be the highlight at the end of a highly productive career.

The only absolute guarantee in business is one day your part in that business will end. It will end by your volition, someone else's volition or God's volition, but it will end. It is singularly the only thing guaranteed in the life of your business. Unbeknownst to you, you already have a plan in place for this. Donald F. White calls it a cessation plan. One day your role will cease and your business will cease right along with it. In the financial services industry the statistics are staggering! Over 90% of all practices will fail to pass to a second generation. At some point in time, most practices just cease to exist. Whether by retirement, disability or death, the chances of your business lasting beyond you are short, unless you shelve your cessation plan for a succession plan.

Would it not be great if you could be in control of your exit rather leaving it to fate or someone else? Succession plans can and do work but not by themselves. You need to be proactive and take the steps before you "need" to exit your firm. Donald F. White shares examples of how men and women with highly successful practices have made the transition from principal to emeritus. He shares the steps to allow everyone involved in your business come out on top. White has seen firsthand how a properly designed and implemented succession plan is a win for your clients, your employees, your successor and you! A cessation plan benefits no one!

You can and should be creating a business that allows the principals to build a firm that can last well beyond themselves, potentially into perpetuity. Get prepared for the BIGGEST and BEST MOVE of your life!